Boldon consists of three settlements, East Boldon, West Boldon and Boldon Colliery. The Boldons border the North of Sunderland, South Shields and Jarrow. The area includes a wide range of housing styles, from Edwardian villas to Victorian terraces, post-war housing to more recent smaller-scale developments. Despite the relatively small geographical area, there are a significant number of older buildings considered as being of architectural merit including churches, public houses and former country houses, as well as modern additions.

Boldon is served by the Tyne and Wear Metro with stations at East Boldon and Brockley Whins, as well as numerous bus routes. Boldon is located near the A19 which offers direct access to Sunderland and is only a 20 minute drive to Newcastle.

Boldon is home to Boldon Leisure Park which offers an 11 screen Cineworld Cinema. Also offering key restaurant operators including Frankie & Benny's, Pizza Hut, Nando’s and McDonalds. Located to the rear of the leisure park is a 24 Hour Asda which caters for all shopping needs. Traditional pubs are abundant in Boldon and are extremely popular within the area. The Black Bull, Beggar’s Bridge and The Red Lion are just a few of the thriving pubs which accommodate many of the locals every day.

With a short Metro journey you can find yourself situated within either Sunderland or Newcastle City Centre. Both offer fantastic shopping options as well as iconic nightlife.

Boldon School is a coeducational secondary school in Boldon Colliery. A community school administered by South Tyneside Metropolitan Borough Council, it has a specialism in sports. The school relocated to a new £17.5 million building in 2006. Boldon School offers GCSEs, BTECs and Cambridge Nationals as programmes of study for pupils. The school also operates a vocational sixth form which offers NVQs and further BTECs.

During the first half of the 19th century the main industries in Boldon were stone quarrying, brick-making, tanning and brewing but during the later half of the century the demand for coal increased enormously so the Harton Coal Company sank a coal shaft in the area in 1866 and built houses for the workers thus creating a new village of Boldon Colliery.  The colliery had remained very important to the area for over 100 when it was closed in 1982.  Other industries have moved in to replace the colliery as the main source of employment.

About Andrew Craig
Andrew Craig Residential Sales and Lettings has been successfully selling and letting homes across the North East for 30 years. We are a family owned independent business with a team of skilled and motivated staff, whose goal is to provide clients with the highest level of service. We understand the importance of people and we believe in building a relationship with our clients. That’s why we are on the High Street and online, because our clients need access to us during their home sale or purchase.
Our teams are there until late and on weekends because experience tells us that is important to our clients. We use innovative technology to help speed up the process and to provide our clients with information when required.
Our services include:
Home sales, Conveyancing, Auction, Land and New Home, Mortgages , Lettings, Property Management, Surveys and Valuations.
Call us on 0191 22612222 or visit www.andrewcraig.co.uk to find your new home or for details of our services. 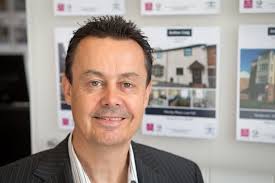 Andrew Craig
Andrew Craig are widely recognised as one of the leading Estate Agencies in the North East of England and we are often the first contact for hundreds of new buyers who register with us each month. Make sure your property is the one they see on our register.
We know what we are doing. In fact, with 12 branches across the North East we have an enormous amount of knowledge about your local market. Time and again we find that our local ‘know how’ is what makes the difference.

Our biggest asset is our well trained and highly motivated team of professional staff. We employ real people to do real jobs and we have a great mix of experience and youthful enthusiasm. We are Regulated by RICS and understand the importance of client care.
Testimonial 1
We purchased our home from Andrew Craig and we were very happy with the service we received from Alex and Julie. Their communication was excellent. Every time we had a question they were friendly, helpful and responded quickly. They even notified us of completion before our solicitor did! Thank you for your help
Testimonial 2
Alex and Julie at Andrew Craig (Boldon) provided an excellent service from start to finish and we highly recommend them! Their knowledge of the local property market is second to none, our house was marketed expertly and we sold very quickly. They kept us informed and supported us every step of the way; from valuation to exchange and completion.
Thank you for making our experience painless!
Testimonial 3
Sale of our property went without a hitch from Alex's intial review to Julie's persistance to get the sale over the line - my ongoing purchase was a different story and I believe if Julie et al were selling that property it would have been a much easier transaction than the uphill battle it turned out to be mainly due to the superior communication and attention to details demonstrated from the Andrew Craig team................
Testimonial 4
From the initial valuation of our property through out the who process until the actual sale, Andrew Craig and in particular Julie Hall have been excellent. They have provided a very professional service, been quick at responding to queries and helped in many ways.
I would be happy to recommend them to other sellers wanting a a company with commitment, knowledge and expertise on how to sell your home.
Testimonial 5
We received a very professional and efficient service. Always kept up to date and well informed. I would certainly recommend.
Testimonial 6
Very professional and helpful throughout process of buying and selling
Andrew Craig are committed to comprehensive property data being made available up-front to make the home buying and selling process quicker, easier & cheaper. This is why we have partnered with Sprift - the UK’s leading supplier of property-specific data.
Data Partners:

The information contained within this report is for general information purposes only and to act as a guide.

Sprift Technologies Limited aggregate this data from a wide variety of sources and while we endeavour to keep the information up to date and correct, we make no representations or warranties of any kind, express or implied, about the completeness, accuracy, reliability, of the information or related graphics contained within this report for any purpose. Any reliance you place on such information is therefore strictly at your own risk. In no event will we be liable for any loss or damage including without limitation, indirect or consequential loss or damage, or any loss or damage whatsoever arising from loss of data or profits arising out of, or in connection with, the use of this report.

Schools are rated differently across the UK. Schools in England are inspected and rated by Ofsted, while Estyn covers Wales and Education Scotland handles Scottish Schools. We have converted their ratings into a single colour-coded rating system as detailed below:

Council Tax pays for multiple services in the property's local authority with only part of it going to the council itself. Residences within a Parish or Town Council area have an additional charge to fund the body. Each parish/town council has a different budget and imposes different fees. Not all councils have parishes/town councils and this varies across the country.

In instances where parish/town councils do affect the council tax value and we do not have the exact figure, we present council tax data with the below highlights. Take care to confirm which is being presented by the dashboard as this will need to be made clear to your clients:

avg - When we indicate the Council Tax price is 'avg', it means we have not been able to obtain an exact figure, so this number represents the mean value of Council Tax across the council for that property band. The exact figure will be slightly higher or lower because each parish/town council is priced differently.

min - When we indicate the Council Tax is a 'min', it represents the known amount that the council sets for itself, but excludes the parish/town council cost which we have not been able to obtain. The additional cost will need to be considered as it will be greater than the indicated price.