Leeds Central Has The Biggest Residential Energy Consumption In England

In the wake of recent reports around soaring energy prices, property data specialist, Sprift, has analysed home energy consumption across constituencies in England. The research highlights that Leeds Central is the highest consuming constituency, followed by Bradford West and then Bradford East.

The study is based on analysis of all England’s Energy Performance Certificates (EPCs) issued within the last 11 years(1), and comparing this data against the Deprivation in English constituencies, 2019 research(2).

Analysis also indicates that more than three quarters (80 per cent) of the highest consuming areas are in the lowest quarter of locations when it comes to deprivation; specifically income and employment(3). For example, Blackpool South is the 7th highest energy user in England, whilst being listed as the 3rd biggest area of overall deprivation.

Sprift also reviewed the top 10 areas in which the largest potential energy reductions could be made, based on an assessment of the recommendations made in their EPCs. Interestingly, Bradford East, Bradford West and Leeds are listed as the top three to benefit, with the potential for 20,160,768 kWh in combined reductions if they implement the suggested improvements.

When it comes to the most efficient, Portsmouth North, Ealing, Southall, Mid Dorset and North Poole, and Aldridge-Brownhills are all in top 10 of the lowest consuming constituencies, as well as lowest potential reductions.

Commenting on the findings, Matt Gilpin, CEO at Sprift, said: “We were keen to run this data research around Energy Savings Week to raise awareness around energy consumption levels, coupled with where potential savings could be made.

“Clearly, homeowners can help to bring down energy consumption levels by taking heed of the EPC recommendations. However, when such a large majority (80%) of the areas are deemed as being the highest when it comes to the Index of Multiple Deprivation (IMD), then it becomes difficult to see how they will be able to make the changes to their properties to reap the potential savings. This issue is likely to become further exacerbated as energy bills are set to rise in the months and years to come.

“It’s positive to read about the most efficient constituencies, perhaps many supported by council energy savings schemes, such as the Switched On Portsmouth initiative.”

1) EPCs issued in the last 11 years, as at 10/01/2022
2) This paper looks at relative levels of deprivation across constituencies in England, including which constituencies have become more deprived or less deprived relative to other areas
3) https://commonslibrary.parliament.uk/research-briefings/cbp-7327/ 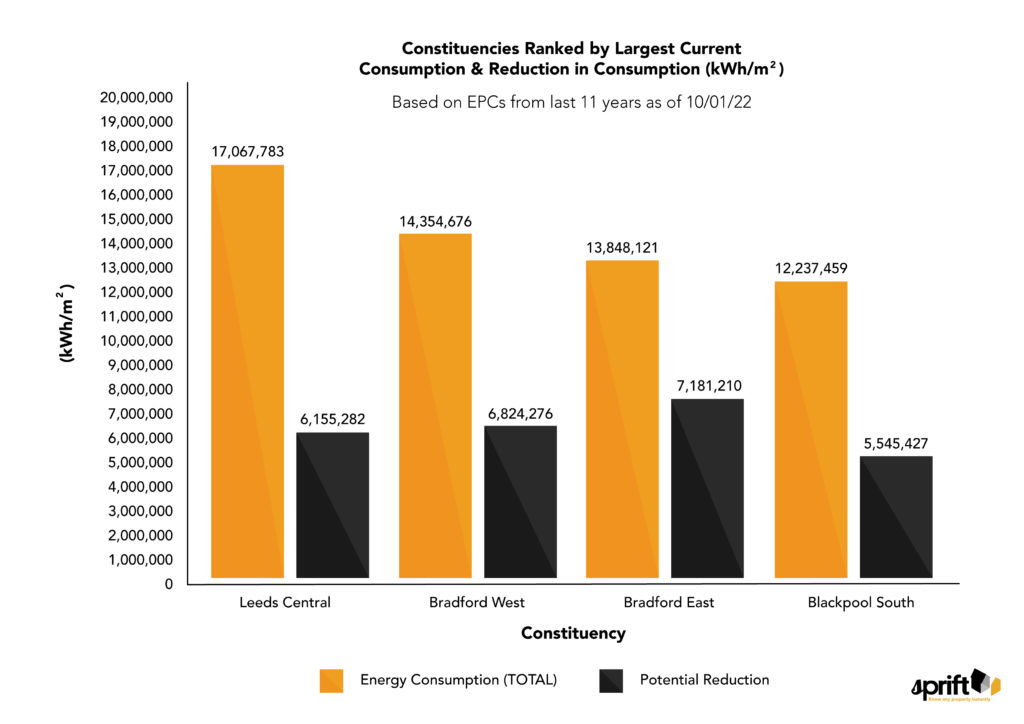